The motor arrived yesterday, it was just in a box with no further instructions. It has just two wires coming out of it. 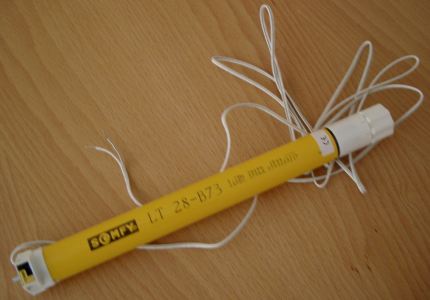 We know from the online manual that it runs at 12 or 24 vdc. After a bit of experimentation we get it to turn in one direction, but can’t get it to rotate the other way. We think you need to reverse the polarity of the supply to change the direction (which we are doing manually), but it will only go one way. Reading the manual reveals that the plastic bits on the end of the motor are actually buttons that can be release to set the stop distance in each direction.

By playing around with the buttons we do manage the get the motor going in both directions, but we don’t manage to set the stop distances - the motor seems to just keep going while it has power. At least we know that we should be able to control the motor if we can find a way to switch the polarity of power to the motor.

I do a bit of research and find that the name for something which allows you to switch the polarity of an output by activating two different inputs is an H-bridge. You can buy these for use in building robots. We’re thinking of using X10, but this approach would require two X10 universal modules (or similar), one to make a circuit to raise the blind and one to lower it.

I try and find out what other people have done, but most seem to have bought the full kit.