Yippee! The 24V power supply (from RS) arrived and it did the trick. It’s a bit of a mess but we managed to control the blinds using a PC: 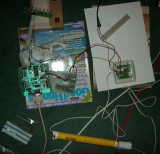 We tested a bit at a time, but ended up with simple Perl script talking to the VIOM via the serial port. The VIOM was set to allow control of two outputs via the serial port (rather than the default of control via the inputs). The outputs were connected to the VIOM relay module. Finally the common and open of each relay output connect to the Centralis DC IB.

The blinds are controlled by a momentary toggle of the up or down output. This starts the blind moving and the Centralis keeps it going for a minute or two - long enough for the blind motor to reach it’s limits (if only we could figure out how to set them). It is also possible to stop the blind moving by sending a momentary signal on both outputs at once.